Present Tense is the two-person exhibition of paintings and works on paper at Siano Gallery in Old City. Sharing the grand exhibition space are two Philadelphia artists, Dave Foss and Michelle Marcuse. Both are active in Philadelphia's arts community: Foss is the executive director of the Da Vinci Art Alliance, which has a 76-year-long history; Marcuse teaches and provides workshops in various encaustic techniques in her Kensington studio.

For both artists, these current bodies of work represent shifts and new directions in their processes. In a brief talk at last night's opening, Foss spoke of his work, which was created in 2006-2007, as a departure from the staining and pouring of paint onto the surface that had been his metier for some time. For this body of work Foss returned to the brush, incorporating line into his colorful, layered, well-worked surfaces. Foss uses the web-like network of line in Immersion to provide order against the chaotic layers of paint, resulting in a sense of tension, perhaps referencing the shared title of the exhibition Present Tense.

Marcuse, well versed in numerous encaustic techniques, presents here a wide range of processes; what she speaks of as a new direction for her is the introduction of digital imagery into the paintings. The resulting imagery and combined processes both confront and draw the viewer in with apparitional allusions hiding in and around opaque and transluscent areas of pigmented wax. Marcuse captures the idea of the raw, ugly beauty of an urban life, working the wax to suggest layers of decay and corrosion. The digital imagery is often presented in muted earth tones with vibrant pinks or blues playing against it, as in Movement Over Time.

This exhibit of paintings and works on paper covers a lot of ground -- emotionally, formally and in the materiality of the work. Foss looks at existential, universal issues on large canvases. Using a smaller format,including a series of near-miniature monotypes, Marcuse studies the overlooked, the easily missed "small overlooked pieces" of her world. One need not have a personal acquaintance with the artists to gain a sense of the intent and purpose behind the work. A dialogue is evident between the two artists; working organic and intuitive against hard edge and geometric, perhaps working in balance and harmony, but each with a distinctive voice to assert some order or control over the elements in life that cannot be wrangled into submission. 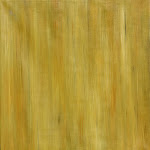